How to use this guide? 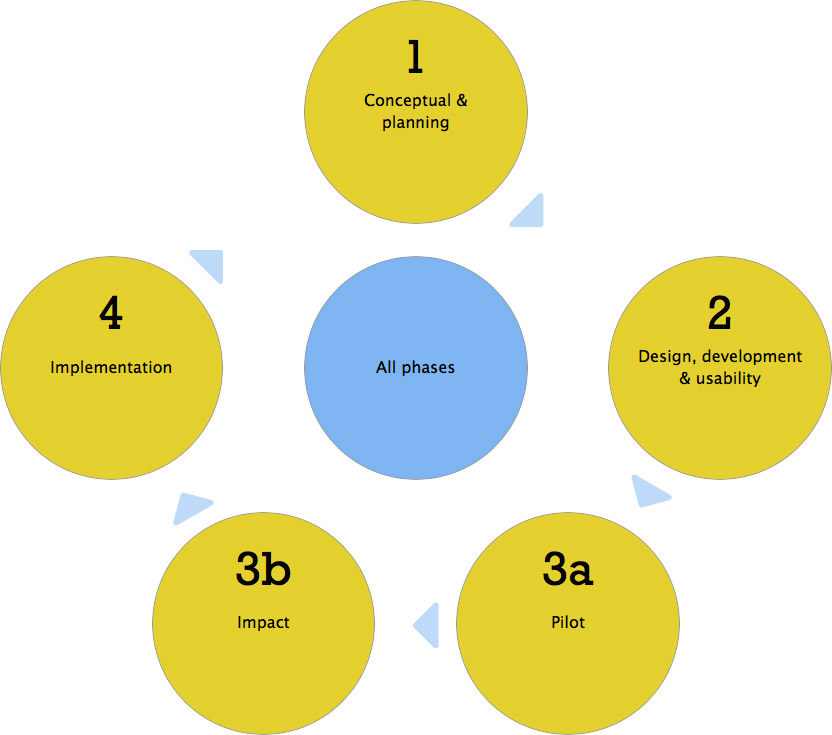 Methodologies within the conceptual & planning phase.

Concept mapping study
​Concept mapping methodology overcomes the drawbacks of qualitative study designs by integrating results from qualitative group sessions with multivariate statistical analysis to represent ideas of diverse stakeholders visually on maps. As the method is purposefully designed to integrate input from larger groups of participants with differing content expertise or interest in a domain in an efficient way and short time frame. Van Engen-Verheul, M. et al., Studies in Health Technology and Informatics (2015). doi:10.3233/978-1-61499-512-8-110
eHealth Needs Assessment Questionnaire (ENAQ)
The E-health Needs Assessment Questionnaire (ENAQ) is useful to map the general needs of older adults with low health literacy regarding eHealth. REF
Focus group
A focus group is a group discussion on a particular topic organised for research purposes. This discussion is guided, monitored and recorded by a researcher (sometimes called a moderator or facilitator). Focus groups are used for generating information on collective views, and the meanings that lie behind those views. Gill, P. et al., Br. Dent. J. (2008). doi:10.1038/bdj.2008.192 Peeters, J. M. et al., JMIR Med. Informatics (2016). doi:10.2196/medinform.4515
Interview
There are three fundamental types of research interviews: structured, semi-structured and unstructured. Structured interviews are, essentially, verbally administered questionnaires, in which a list of predetermined questions are asked, with little or no variation and with no scope for follow-up questions to responses that warrant further elaboration. Conversely, unstructured interviews do not reflect any preconceived theories or ideas and are performed with little or no organization. Semi-structured interviews consist of several key questions that help to define the areas to be explored, but also allows the interviewer or interviewee to diverge in order to pursue an idea or response in more detail. Gill, P. et al., Br. Dent. J. (2008). doi:10.1038/bdj.2008.192
Living lab
A Living Lab is a user-centered, open innovation ecosystem based on a systematic user co-creation approach, integrating research and innovation processes in real-life communities and settings. Swinkels, I. C. S. et al., Journal of Medical Internet Research (2018). doi:10.2196/jmir.9110
Method for technology-delivered Healthcare Measures
The Method for Technology-delivered Healthcare Measures is designed to systematically guide the development and evaluation of technology-delivered measures. The five-step Method for Technology-delivered Healthcare Measures includes establishment of content, e-Health literacy, technology delivery, expert usability, and participant usability. Kramer-Jackman, K. L. et al., CIN - Comput. Informatics Nurs. (2011). doi:10.1097/NCN.0b013e318224b581
Model of Oinas-Kukkonen
The model of Oinas-Kukkonen includes principles for persuasive design and describes the key issues behind them. The model allows defining the persuasive context, describing the targeted users, their goals, intentions and technology use.
Alpay, L. et al., Heal. Informatics J (2018). doi:10.1177/1460458218796642
Rapid review
​The term ‘RR’ does not appear to have one single definition but is framed in the literature as utilizing various stipulated time frames between 1 and 6 months. The word ‘rapid’ indicates that it will be carried out quickly, although this labelling does not inform us as to exactly which part of the review is intended to be carried out at a faster pace than a full SR. The name could imply the manipulation of agreed SR processes such as quicker searching and searching fewer databases, faster inclusion screening and/or having a narrower remit for inclusion of studies, limiting data extraction or analysing the data by using only selected methods of quantitative or qualitative analysis in order to draw rapid conclusions about a specific research question. Indeed, it seems that any or all of these specifications could be applied to a RR in order to draw fast conclusions about a specific health intervention. Harker, J. et al., J. Evid. Based. Healthc. 10, 397–410 (2012).
Survey methods
Surveys are commonly used in telehealth research to assess patient satisfaction, patient experiences, patient preferences and attitudes, and the technical quality of a teleconsultation. The popularity of the survey as a method of measurement can be understood through three major strengths of this technique. First, confidential survey questions are well suited to capture individuals’ experiences, perceptions and attitudes. Second, pre-existing scales can be used across studies, enabling the comparison and replication of results. Third, the validity and reliability of survey instruments can be assessed through rigorous, transparent and well-accepted validation methods, providing the researcher with confidence that the measures tap the intended constructs, and provide an accurate measurement. Langbecker, D. et al., J Telemed Telecare 23, 770–779 (2017).
Systematic review
A systematic review summarises the results of available carefully designed healthcare studies (controlled trials) and provides a high level of evidence on the effectiveness of healthcare interventions. Judgments may be made about the evidence and inform recommendations for healthcare. These reviews are complicated and depend largely on what clinical trials are available, how they were carried out (the quality of the trials) and the health outcomes that were measured. Review authors pool numerical data about effects of the treatment through a process called meta-analyses. Then authors assess the evidence for any benefits or harms from those treatments. In this way, systematic reviews are able to summarise the existing clinical research on a topic. REF Systematic review - cochrane.
Think aloud method
The think aloud method can be of high value in evaluating a system’s design on usability flaws and is therefore frequently used to gather information about a system’s usability in testing computer systems with potential end users. During recorded usability sessions, users ‘interact’ with a (prototype) system or interface according to a predetermined set of scenarios while verbalizing their thoughts. Analyses of these verbal reports provide detailed insight into usability problems actually encountered by end users but also in the causes underlying these problems. Jaspers, M. W. M. et al., Int. J. Med. Inform. (2009). doi:10.1016/j.ijmedinf.2008.10.002

Methodologies within the pilot phase.

Matched cohort study
​Matching is not uncommon in epidemiological studies and refers to the selection of unexposed subjects’ i.e., controls that in certain important characteristics are identical to cases. Most frequently matching is used in case-control studies but it can also be used in cohort studies. The matching procedure is often directed towards classical background factors such as sex and age. Faresjö, T. et al., Int. J. Environ. Res. Public Health (2010). doi:10.3390/ijerph7010325
A/B testing
A/B testing (also known as split testing or bucket testing) is a method of comparing two versions of a webpage or app against each other to determine which one performs better. AB testing is essentially an experiment where two or more variants of a page are shown to users at random, and statistical analysis is used to determine which variation performs better for a given conversion goal. Gabarron et al., BMC Med. Inform. Decis. Mak.(2015), doi:10.1186/s12911-015-0143-9
Case series study
Observational study design which describes several patients (cases) over time. Mostly hypothesis forming (early stage of effectiveness research) and without control group or placebo.

Methodologies within the impact phase.

Matched cohort study
​Matching is not uncommon in epidemiological studies and refers to the selection of unexposed subjects’ i.e., controls that in certain important characteristics are identical to cases. Most frequently matching is used in case-control studies but it can also be used in cohort studies. The matching procedure is often directed towards classical background factors such as sex and age. Faresjö, T. et al., Int. J. Environ. Res. Public Health (2010). doi:10.3390/ijerph7010325
(Fractional-)factorial (ANOVA) design
Evaluation of eHealth treatments often occurs via randomized clinical trials. While there is a vital role for such trials, they often do not provide as much information as alternative experimental strategies. For instance, engineering researchers typically use highly efficient factorial and fractional-factorial designs that allow for the testing of multiple hypotheses or interventions with no loss of power even as the number of tested interventions increases. Baker, T. B. et al., Journal of Medical Internet Research (2014). doi:10.2196/jmir.2925 Collins, L. M. et al., Am. J. Prev. Med. (2007). doi:10.1016/j.amepre.2007.01.022
Action research
Action research (AR) is used to both understand and assist eHealth implementation in complex social settings. The AR method provides an insightful technique for studying information systems development (ISD) process across time and across technologies and contexts. Defined as “an inquiry into how human beings design and implement action in relation to one another”, the purpose of AR is to observe and create effective organizational change. M. Chiasson et al., Int. J. Med. Inform. (2007), doi:10.1016/j.ijmedinf.2006.10.001
Adaptive design
This is an alternative clinical trial design. The idea is to use accumulating data from the trial to make preplanned changes to the design. Usually, a part of the adaptive design is to specify in advance a predictive model that uses intermediate or surrogate endpoints to predict the final primary effectiveness endpoint, which helps to guide when to stop recruiting more patients unnecessarily into the trial based on posterior predictive probability calculations; this is especially helpful in studies with long-term endpoints when the intermediate endpoints are thought to be predictive.
G. Campbell et al., Biopharm. Stat. (2016). doi:10.1080/10543406.2015.1092037
L.M. Law et al., International Journal of Medical Informatics (2014), doi:10.1016/j.ijmedinf.2014.09.002
Big data analysis
Overarching term for all kinds of methods used for analysis of ‘big’ datasets. Mostly ‘machine learning’: an umbrella term for techniques that fit
models algorithmically by adapting to patterns in data. Mooney, S. J. & Pejaver, V. Big Data in Public Health: Terminology, Machine Learning, and Privacy. Annu.
Rev. Public Health (2018). doi:10.1146/annurev-publhealth-040617-014208
Case series study
Observational study design which describes several patients (cases) over time. Mostly hypothesis forming (early stage of effectiveness research) and without control group or placebo.

Methodologies within the implementation phase.